Why Let White Guys Have All the Fun

A couple of weeks ago I was in Miami while they were interviewing American rapper Master P. I went in the room and he said “Look, everybody that’s an entrepreneur. Like everybody need to read this book.”

And I’m gonna be real with y’all. I don’t really read books like that, right? But the title was Why let white guys have all the fun!

I don’t feel like it’s racist, but I wanted to learn more about what the title meant.

Growing up in a black man in Brooklyn, it’s almost like you feel limited. You feel like this is the lifestyle the other races live and this is what we’re subject to have to deal with.

“I think in trucking, a lot of people think that those of my race are just supposed to just drive the trucks. You didn’t really see many of us owning the companies.”

Even with my industry. In trucking, growing up, everybody looked at it as a white industry. Majority of the people that work in trucking are Caucasian and it is what it is. I’ve seen it at conventions.  I go to the MATS truck show in Louisville, Kentucky once a year and it’s so funny. This is the biggest truck show in America and thousands and thousands of thousands of people fly here once a year for it. And it’s a trucking seminar, they have tricked out trucks, they do seminars, they educate people in trucking. You’ll see all these peoples, but you’ll be able to count like one by one, how many minorities are in the crowd.

I think in trucking, a lot of people think that those of my race are just supposed to just drive the trucks. You didn’t really see many of us owning the companies. It didn’t seem realistic. I’m just happy that we had the opportunity to show people you can be a minority and dominate this industry.

And that’s what we represent. We represent the underdogs, like the underachievers. I mean the under-qualified and over-achieved. These last two years, being around my circle of CEO’s, I’ve seen what everybody has accomplished. Like the stuff that I’ve seen, the stuff that we’ve accomplished, it didn’t seem realistic. And we’ve definitely broken down those barriers.

Like, why let the white guys have all the fun? 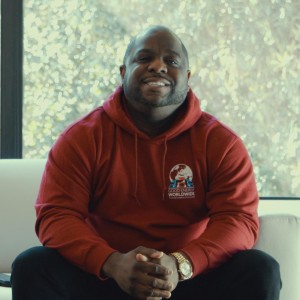 Alix Burton is the Founder and CEO of Good Energy Worldwide, and a serial entrepreneur. He started his own trucking company in 2013 and has since grown the business to include a fleet with over 10 trucks and a dispatch service. Alix also teaches aspiring entrepreneurs how to start their own trucking company through a consultation platform, where each day dreams continue to become reality for thousands of people across the country.